James Morrissey shares photos from his 2017 trip to see the first total solar eclipse viewable in the continental USA in 39 years. 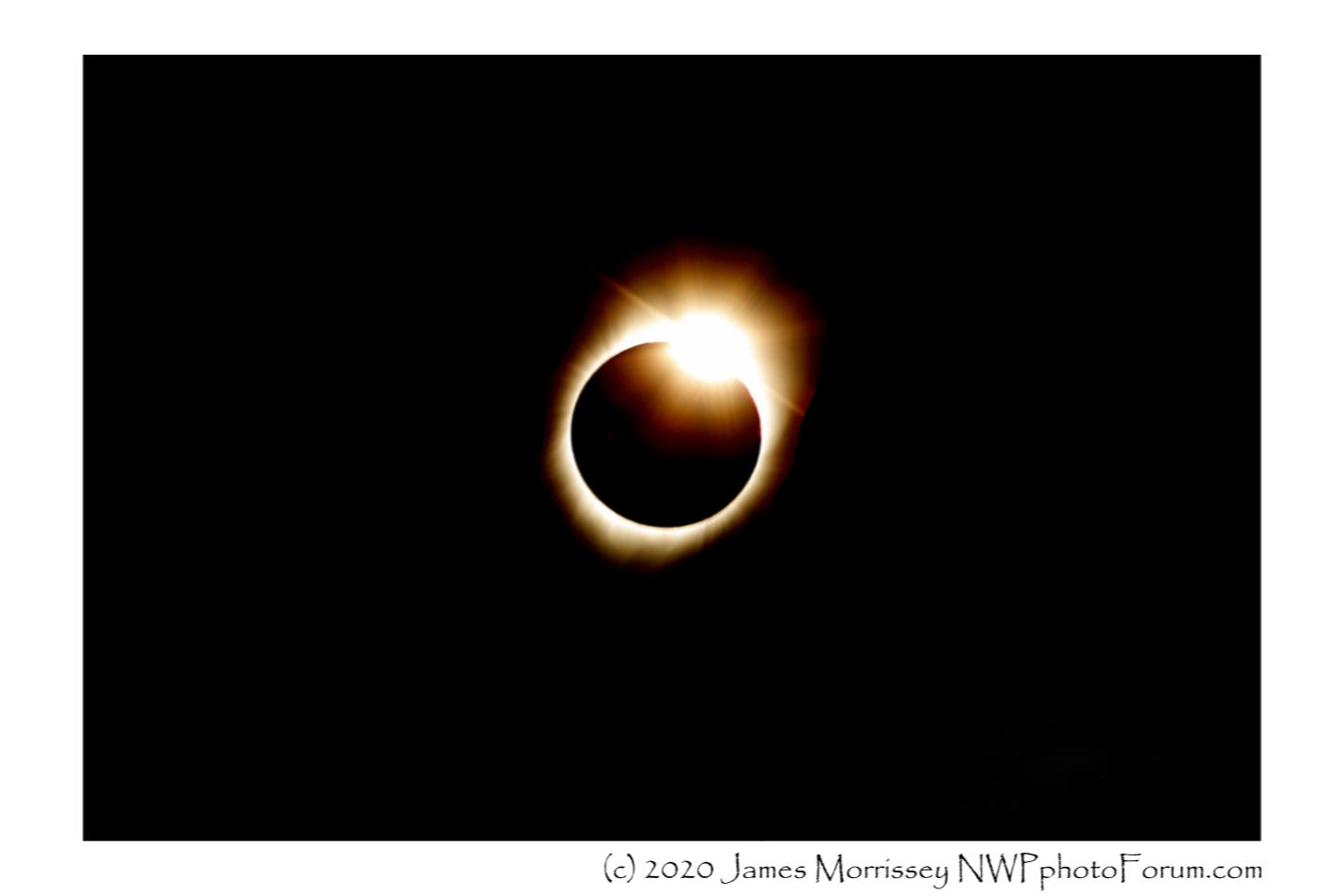 I originally started on this story nearly three years ago, shortly after we returned from Salem, Oregon where we saw our first total solar eclipse. I shelved the article because it took me too long to write, and the Interwebs were just saturated with eclipse photos. Given how gloomy things have been with the Novel Corona Virus, I decided to revisit the photos of the eclipse - and look at some coronas that I really like!

One might ask why we chose Salem Oregon to view the eclipse. We actually had nothing to do with it. My brother, Patrick, is a physicist and astronomer - and he said that's where we were going. So we did. I think he may have been battle planning the best locations to view the event for months - perhaps even years. I am sure there were several maps and diagrams with circles and arrows and a paragraph on the back of each one, explaining which each was. I am also sure that he had diagrams of the approach, the getaway, the northwest corner the southwest corner and that's not to mention the aerial views. 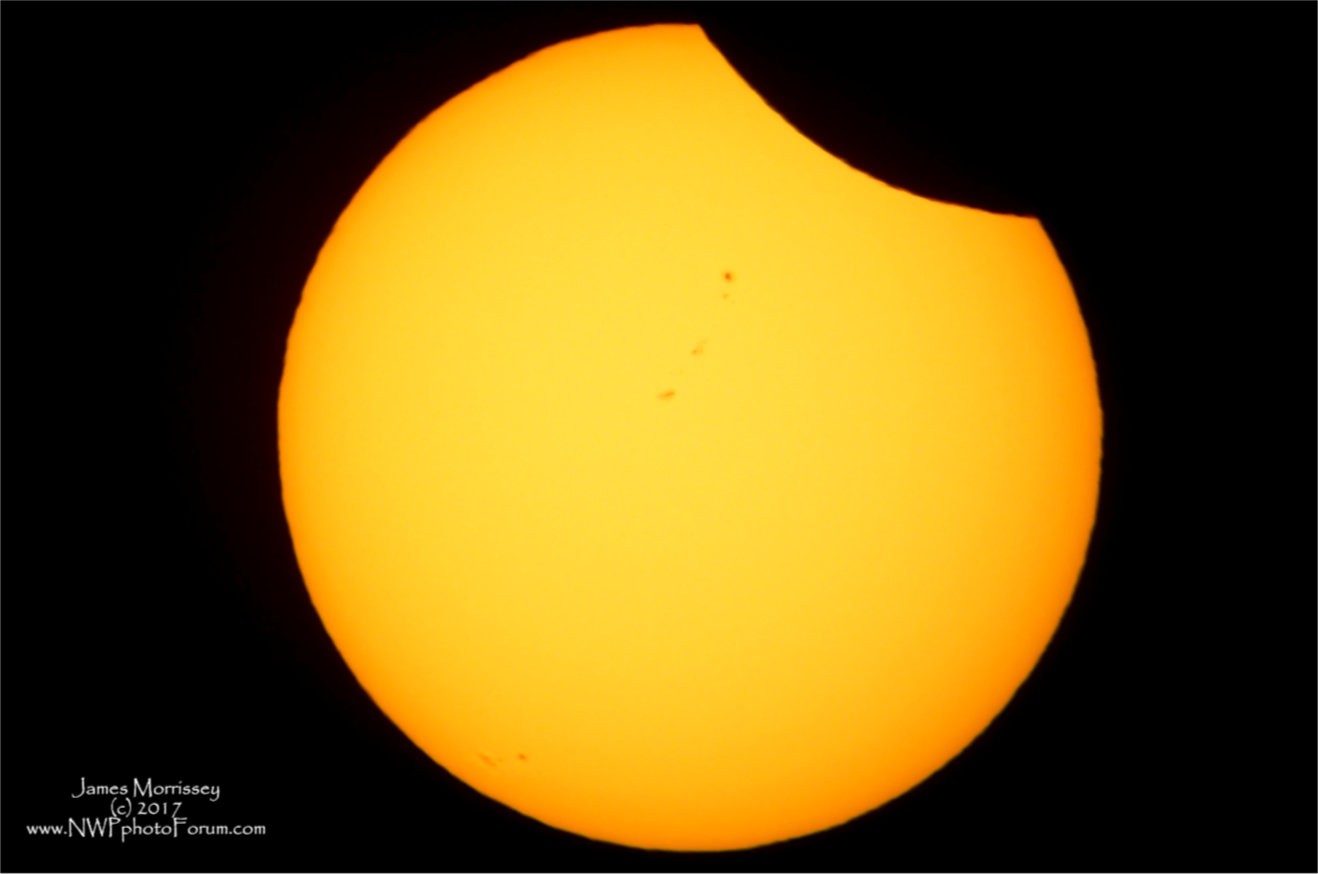 His interest in astronomy goes back pretty much as long as I remember. For example, when he was 13 years old, he built a telescope from scratch in our back yard. Nearly 40 years later, the cellar of my parent's home is still stained with the rouge from when he polished down the mirror. After taking his science project to the Stellafane National Convention, my parents then somehow gave him carte blanche to use lots of power tools in order to make a new barrel for his telescope. Either it was amazing parenting or stunning benign neglect. It is safe to say that many of the events that I got to share with my brother during my childhood had something to do with astronomy. Whether it was going with him to Skyscrapers Observatory, in Scituate, or later when he went to Brown, he somehow always found a way to get me to freeze my ass off with him in the middle of the Winter while he looked into the cosmos at M-Whatever-You-Call-It. Seriously. It was cold. He owes me.

As we have grown older, I see none of my siblings as much as I wish I did. Everyone has places to go and people to see. I was pretty excited though when Pat reached out to me and asked if Chanthee and I wanted to join his family in Portland Oregon for the 2017 North American solar eclipse in August. It was an experience like none other I have ever had. A colleague of Toni's (my brother's wife), named Mike Carrick, just happened to have a home in Salem with a perfect location to view of the solar eclipse. He kindly offered to open his home to Patrick and the rest of our motley crew. Mr. Carrick is a historian and a collector of rare firearms, with a particular passion for the adventurers Lewis and Clark - adventurers near and dear to my heart. He and his family also put on an amazing spread. I realize that this is a bit late - but if you ever see this, Michael, thank you so much for your kindness...and the spread. I mentioned the spread, right? it was delicious. 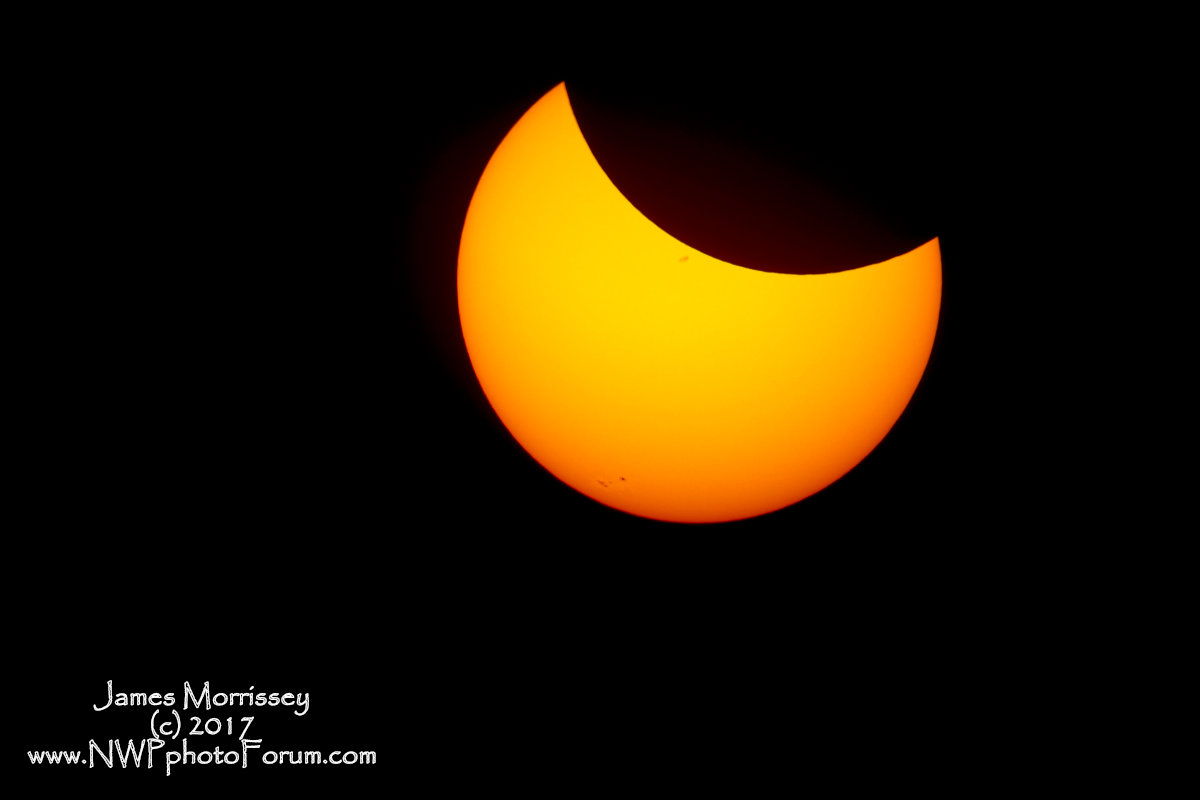 The Eclipse - Well On Its Way

None of us Morrisseys are necessarily the most emotionally demonstrative. Actually, I am fairly sure we were socially distancing way before it was cool - or even necessary. Well, it always was with Father Silva - and it definitely saved me. Another win for social distancing!! Anyway, it is safe to say that I am very proud of all of my siblings and the work that they do. It is one heck of an impressive family. Today was Patrick's day to shine - and I think it is important to say that I am very appreciative to the fact that he took the time throughout my childhood to open my eyes to a universe that I might not have otherwise shown a real interest in otherwise. I tend to be a 'cure our problems here' kind of guy - but I have come to realize as I have gotten older (I think I mentioned earlier something about getting older) that the two items are not mutually exclusive - and are highly interdependent. The world needs dreamers as much as we need doers.

The rest of it is history. Chanthee and I made the arrangements - which included burning all of our Delta Skymiles and booked two seats to Seattle. We had initially planned on flying in to Portland, but the cost of booking a car was over $2,000 for a week. I was blown away by how much the Solar Fever had struck. By flying into Seattle, a couple of hours away, we were able to rent a full size SUV for the week for $580. I was fortunate because when we landed, the few agencies that had cars available were also now charging upwards of $2,000 for a week. To give Dollar credit, we were three hours late landing and they could have given our car away to someone else. They did not. It also meant that we were going to take a few days and go to Olympic National Park afterwards. I also wanted to go to Seattle Coffee Gear and pay homage to Gail Williams, my favorite YouTube personality...but unfortunately there was not time for it all. 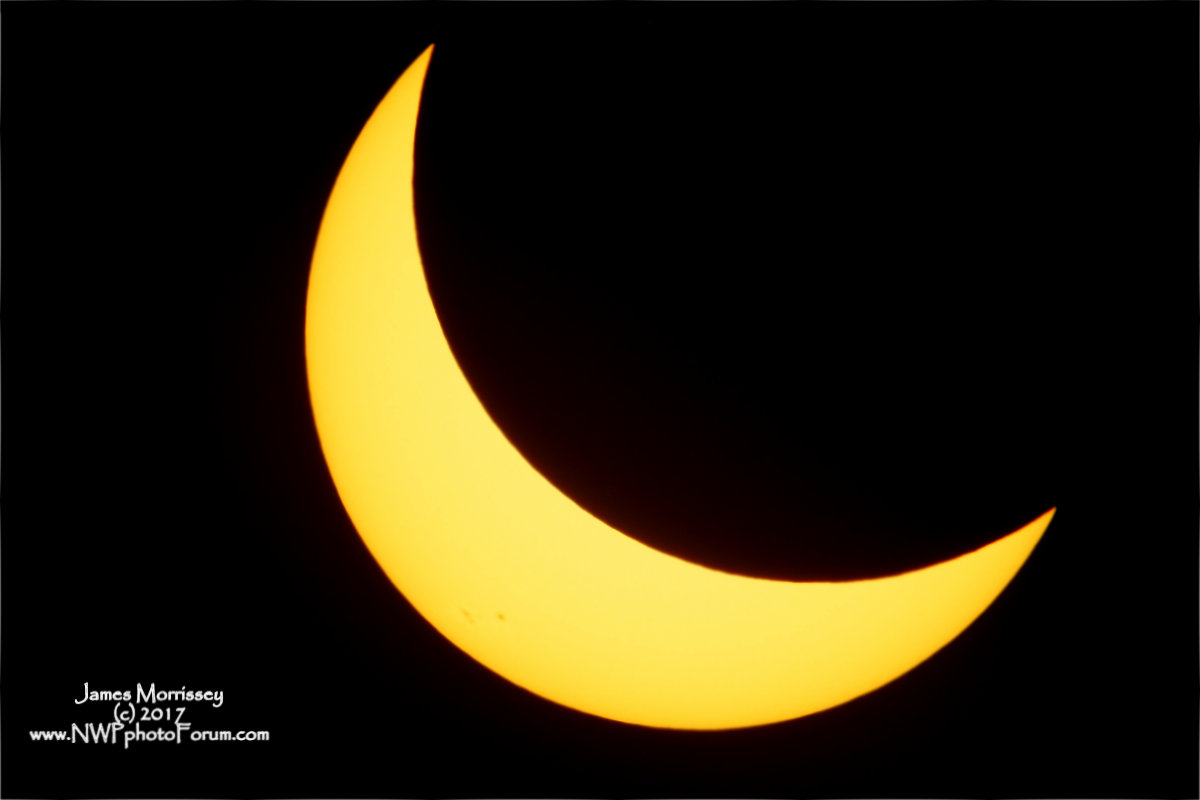 The Corona's Are Coming Soon!!!!!! Get Some Distance!

Pat was very concerned about dealing with congestion gridlock on the day of the eclipse, so we snuck out of the hotel at around 2:30 AM and headed to Mr. Carrick's house. We parked our cars and slept in front of the house until they came out and woke us up and invited us into the house for an early morning spread (I mentioned the spread again) which included my favorite beverage (coffee).

As my solar filter had not come in for either my Canon or Chanthee's Olympus 4/3 cameras (because they were sold out - like everywhere), we thought that we were going to be able to photograph for the two or so minutes that the moon would be obscuring the sun (during the full eclipse). Fortunately, Patrick had a filter on his telescope and we were able to link the Pen 4/3 lens almost perfectly to the eye-cup of the telescope. The photos were taken during the near four hours that the eclipse actually occurred (not including the two minute full eclipse portion). Patrick also had multiple sets of those Eclipse Glasses that made me feel like I was in a 3D movie theater. He may also have been responsible for the run on them on Amazon.


Me and Chanthee Thoughtfully Staring Into The Ether or Me and My Bestie Being Silly. For the record, it appalls me that I still own that green shirt. It done more to blow out rods and cones than staring at the eclipse ever did.

For anyone who had been vaguely paying attention, there had been a ton of hype on the Interwebs about the eclipse. This was the first solar eclipse in the continental USA in 39 years. I think the Internet actually broke at one point because someone posted a video of a guy shooting straight at the sun without a solar filter and nearly melting his camera. For people looking for advice on how to photograph a solar eclipse, let me start there. Don't do that. It is a bad idea - and dangerous. That video still scares the poopers out of me. 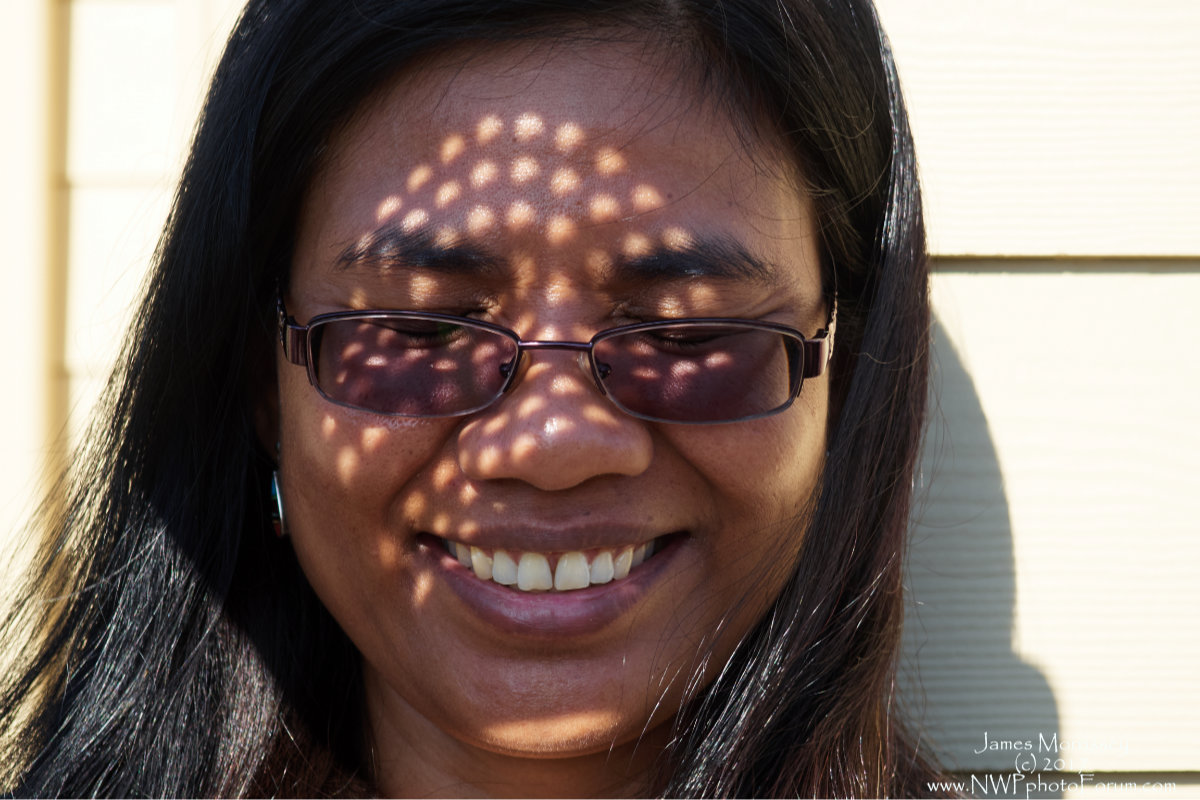 Chanthee Being A Science Experiment - As Well As Stunningly Beautiful.

The second piece of advice is to follow the same rules that you would normally use to photograph the moon in any landscape composition. Specifically, you need to keep your shutter speed high enough so that the moon's motion does not blur the exposure. In a landscape composition, this can be difficult as frequently I am shooting very long exposures with compositions with profoundly different light values in different parts of the exposure. I have learned that keeping the exposure over 1/60th of a second usually does the job...anything slower than that and your image is cooked.

It is pretty hard to explain the physical experience of the eclipse in and of itself. The light took on an almost other worldly look - with color and contrast being sucked out of the image. Everything was gray - like an alternative universe. The other thing I remember was the wind and the rapid temperature drop. It got colder and colder as the winds whipped drastically. 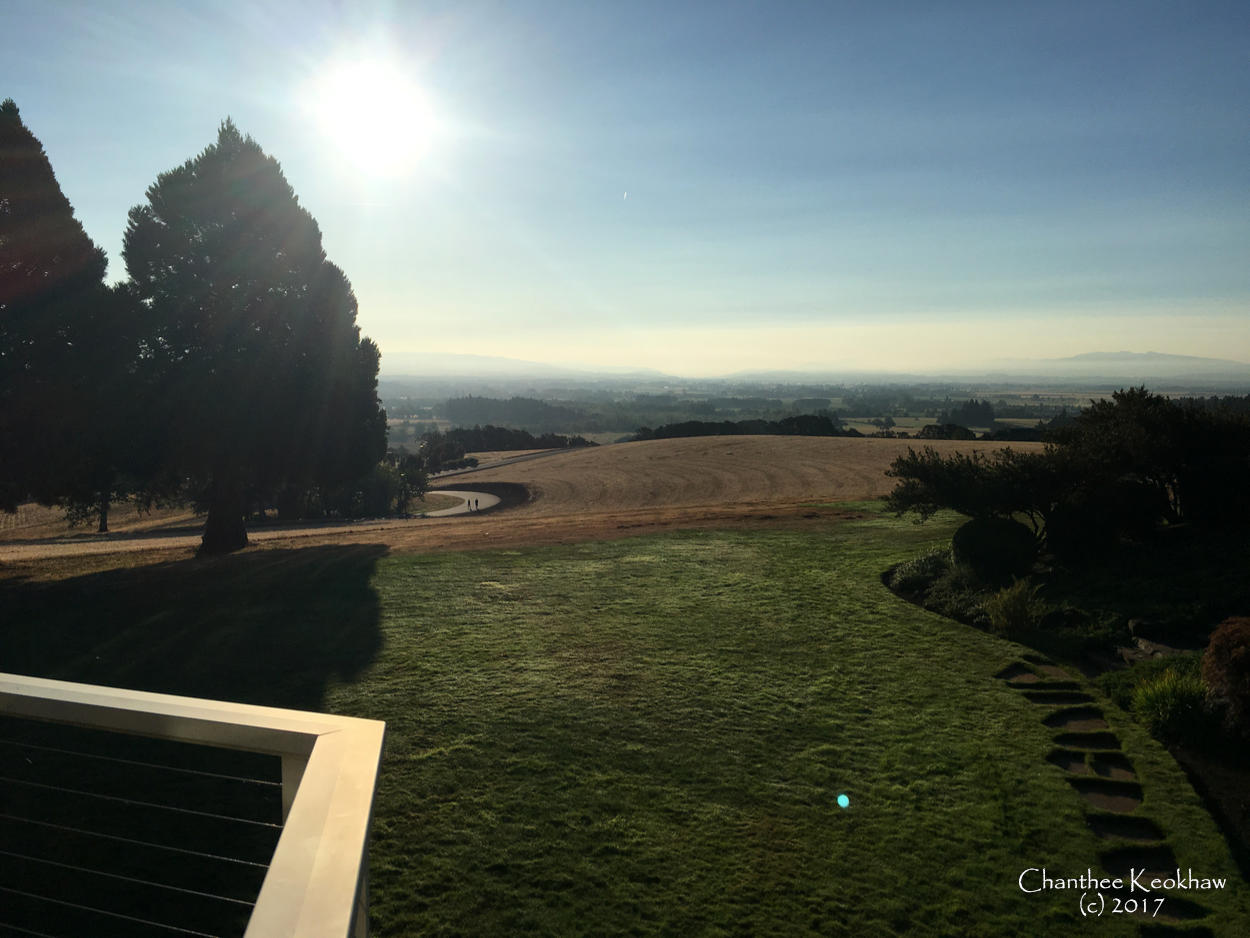 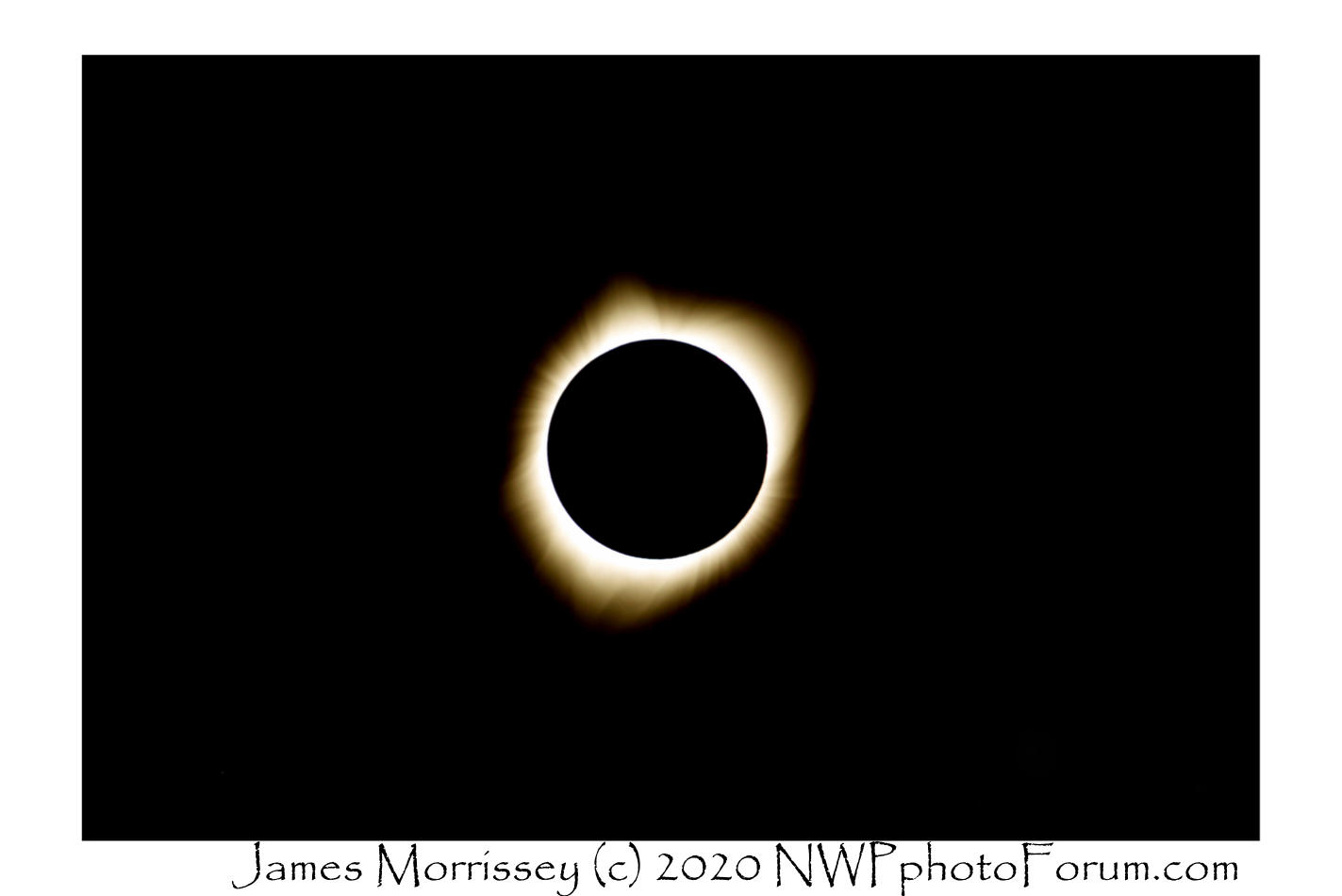 Staring Into The Eye of Totality - The Corona

For the two or so minutes that we were in the Eye of Totality, it was wonderful to be able to photograph without any filters directly at the sun. I had to switch from my Sigma 300 F2.8 to my Canon 70-200 and 2x extender. Somehow, my 300 F2.8 (Sigma) crapped out on me and the focus mechanism was completely unusable...auto or manual focus. That was a $700 repair by the way. I was disappointed to be switching to the 200 because I don't like using the 2x converter as it is probably the most effective way to suck the life out of an image possible. I had to stop down and kick up the ISO to compensate - which definitely had an effect on my images. Having said that - I am really quite satisfied with the images I got during this session. Cropped, I am still able to get a lovely 16x24 from my Canon - and if I pushed it, I am sure I can get 20x30.

This is my favorite photo from the event - The Diamond Ring. It was described best for me by the website "Weatherscapes." This effect occurs at the beginning and end of totality. "As the last bits of sunlight pass through the valleys on the moon's limb, and the faint corona around the sun is just becoming visible, it looks like a ring with glittering diamonds on it. It is a most lovely sight, which typically merely lasts a second or so. The highly transient diamond ring effect really shows that the universe is not as static as it looks like."

I never, not even for a minute, take for granted how privileged I am that I was able to do something like this on the drop of a dime...and even other people's dimes.

For the record, we were crashing on Patrick's hotel room and his family's loss of space and privacy was our gain. I know how lucky I am that I have the time, the resources and the connections to see something truly special. I may not be rich, but I am a very fortunate man. One last piece of advice - if you are planning on seeing the next solar eclipse, be prepared for traffic on both sides of the event. By leaving early, we missed the traffic to heading to the epicenter that was Salem...however, it took over 8 hours to do a three and a half hour drive to Seattle afterwards. Yikes.

Well - that's it...go and get some beautiful photographs in 2024. I plan on being on Cadillac Mountain - how about you? If you see me and Chanthee, please remember to keep a minimum of 6 feet distance. You know - the corona. 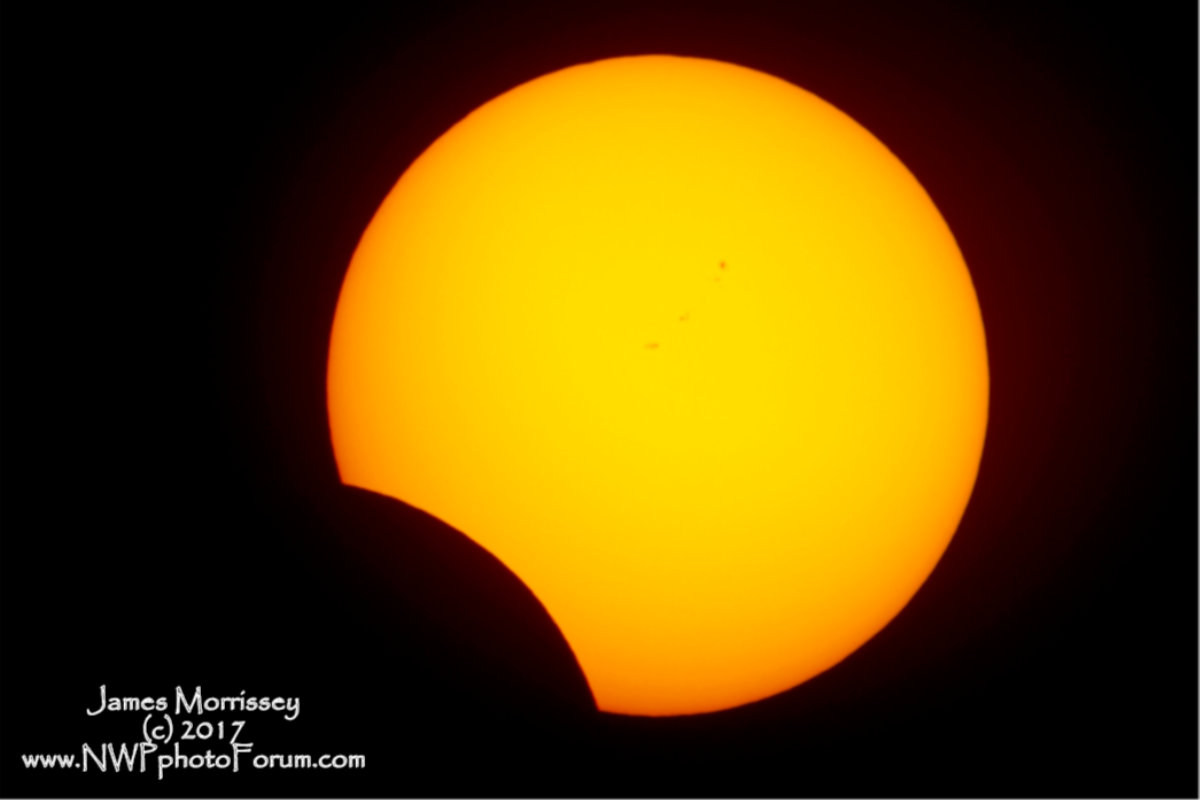 Nearly Over - The Other Side of Darkness

Also, consider joining our new Facebook Group, where we have an amazing community of photographers sharing their love of Nature, Wildlife and Pet Photography.
https://www.facebook.com/groups/nwpphotoforum/